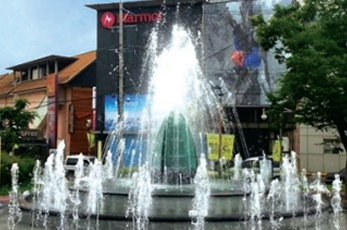 Queens Road is a European-style outlet complex opened in the former slaughterhouse at Jungni-dong in March 21, 2003. Queens Road aims for the complex cultural space for shopping and cultural life. The European fancy and stylish buildings attract people’s eyes. The shopping complex is composed of 11 buildings with 2 stories underground and 3 stories above the ground in the site reaching up to 5,000 pyeong. In particular, the Central Square can accommodate up to 1,000 people and it differentiates Queens Road from other outlets. Various big cultural events are held in Queens Road to satisfy the cultural desires of Daegu citizens. The famous brands are densely located in Queens Road Fashion Street and whole family can enjoy the shopping space with surrounding green area

The street fashion outlet town, Queens Road, located in the former slaughterhouse at Jungni-dong, Seo-gu opened in March 21, 2003 and customers can enjoy 120 famous brands. Queens Road is the European-style outlet complex and it is a complex cultural space where people can enjoy both shopping and cultural life. At Queens Road, there are 11 European-style buildings with 2 stories underground and 3 stories above the ground in the site reaching up to 5,000 pyeong. 120 stores are located within 1km distance and the parking lot can accommodate up to 800 cars. The store area is about 26 pyeong and it’s the widest among the other outlets.

Bed linen manufacturers in Daegu take up 27 %(578 manufacturers) of overall manufacturers in Korea. Including OEM, 50~60% of bedding products circulated in Republic of Korea are manufactured in Daegu. Daegu Keunjanggil Bed Linen Popular Street stands in the center of such manufacturing business and it actively supplies high-quality bed linen products to citizens and all Republic of Korean regions in a reasonable price.
The street is also located near the culture and shopping streets such as Seomun Market, Daegu Modernization Street, and Dongseong-ro and visitors can easily access the street.

The commercial furniture district could be maintained over 60 years because of the excellent service. The furniture stores in the street provide furniture maintenance and repair services to care their customer for the whole life. Recently, increased number of people buy furniture in the Internet. However, some people visit Wondae Furniture Street again for its excellent services.