Waryongsan Mountain is 299.6m above the sea level, and the western and Dalseo-gu part of the mountain is the part of the dragon’s tail and body while the dragon’s head lies to Dasa-eup, Dalseong-gun. There are various folk tales related to Waryongsan Mountain. Once upon a time, there was a jade pond under a mountain and a dragon used to play in the jade pond. One day, when the dragon was about to go up to the sky, a woman passing by the pond saw the dragon and yelled ‘The mountain is moving!’. Hearing the sound, the dragon fell to the dragon and became the mountain. So, the mountain got the name “Waryongsan”.
Meanwhile, there is also another folk tale. During the Japanese invasion in 1592, Li Rusong from China came to Korea to support Korean army. Li Rusong recognized that the mountain has outstanding vital force. Worried about the birth of numerous talents, Li Rusong cut the main stream of the mountain. Then the dark-red blood surged up from the stream.
In another folk tale, the heaven got made at a dragon and the dragon fell and died by the sword of a general. Later, the dragon was called ‘Waryongsan”.
The shape of mountain is like a dragon coiling itself and the tail and the head part are very close. According to 『Gyeongsang Eupji』, the regions are Sungsan-bong regions and the regions are called “Seongseo” meaning the western castle. 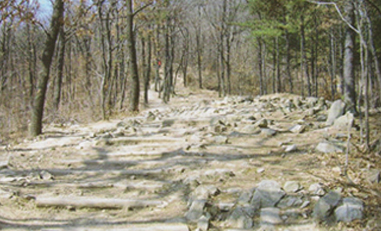 Trail to Top of Waryongsan Mountain 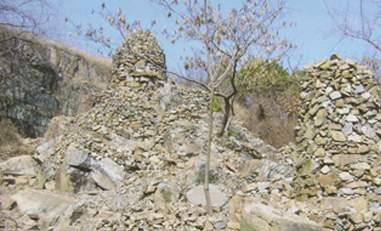 Stone Tower on Sides of Trail to Waryongsan Mountain

Waryongsan Mountaion regions are the treasure house of the ancient relics. In 1923, groups of Japanese found hundreds of stone-lined tombs at the hilly lands (Present Naedang-dong, Jungni-dong, Bisan-dong regions) from Waryongsan Mountain to Dalsung Park. The stone-lined tombs were from Gaya Period. From the evidence of the tombs, it is assumed that the independent Gaya was around the Waryongsan Mountain side. For the excavation work in 1923, accessories such as gilt bronze crown, gold earrings, silver belt, gil-bronze shoes, weapons such as sword with round pommel, sword, spear, iron hook, iron arrowhead were found. Also, harnessry and lamps such as saddle cover and foot ring were also found in the excavation.
Another excavation work was carried out in 1974 and many relics were found in Waryongsan Mountain regions. In the regions, the relics of early Bronze Age and Iron Age such as copper, bronze bit, iron bit, horse face cover, horse bell, and Chinse mirror, Hankyung and Mobangkyung were found. Those relics show that the central force of tribal state started in Waryongsan Mountain and extended their influence to downtown regions of Daegu.

Although Ihyeon Park was once an old park, it was recreated as the representative luxury park of Seo0gu through improvement of facilities and expansion of rest areas. At Ihyeon Park, the wide lawn plaza, wind sound street, cherry blossom street, and ginkgo tree street are newly arranged for a pleasant walk in the forest walkway. Also, the residents can enjoy the park during the night time with the bright streetlamps.

Furthermore, various flower garden with wild flowers, silver grass field, observatory deck, and eco-pond are arranged at Ihyeon Park as the urban green healing park. The park is used as the eco experience space by the childcare centers and the park is spotlighted as the tourist attraction with connection to children’s water pool at Ihyeon Park. In addition, visitors can enjoy various park facilities such as Seo-gu Cultural Center, Seo-gu Youth Center, Children’s Library, Community Sports Field, and Daegu Seogu Public Sports Center. In the future, Green Way will be established for connecting the green buffer zone in Seodaegu Industrial Complex and Ihyeon Park. With such Greenway, Ihyeon Park will become the culture and art-themed cultural space through organization of 6.2km length walkway. 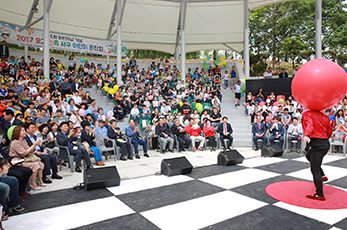 The roof-top eco park in Seo-gu office building was completed in July 2016 after being selected as the urban mini-ecosystem preparation project in July 2015 hosted by Ministry of Environment for active response to climate change by enhancing ecological healthiness and reducing urban heat island effect and for natural learning area.

The roof-top eco park has total area of 1,196㎡. In the eco park, artificial wetlands, bird hotel, pile of rocks are arranged for the habitat space for small organisms. Also, 32,000 types of arbor and shrubs such as lagerstroemia indica, pussy willow, 5,400 types of herbaceous flowers, 1,000 types of wetland plants suitable for the artificial environment are planted in the park. Also, the eco park is composed of 4 unique spaces such as deck rest area, lawn field, butterfly and dragonfly field, and wetland field are arranged for combining nature and culture under the theme of plant and water.

Also, there is an elevator to roof-top and it is available from ground parking lot. The elevator enhances convenience to provide pleasant rest area for the civilians and local residents. Furthermore, the eco park is differentiated from the existing fragmented green roof project. The eco park emphasizes ecological function by arranging habitat space and artificial wetland and plays the role of eco experience space.

Pyeongni Park is a beautiful urban park with a fountain. It is located behind Seo-gu office and it provides well-being walk course and sports facilities. The residents can enjoy walking exercise and simple daily exercises. In Pyeongni Park, there is a wide square around a fountain spouting cool water. The residents love the place and they take a rest under the green trees.